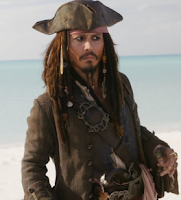 Town Clerk: "Jack Sparrow."
Jack: "Captain... Captain Jack Sparrow."
Town Clerk: "...for your willful commission of crime against the crown. Those crimes being numerous in quantity and sinister in nature..."
-Pirates of the Caribbean: Curse of the Black Pearl

Jack: “The Immortal Captain Jack Sparrow. It has such a lovely ring to it…"
-Pirates of the Caribbean: At World's End

Guard: "Are you the real Jack Sparrow?"
Jack: "There should be a Captain in there somewhere."

-Pirates of the Caribbean: On Stranger Tides


In every movie, someone always manages to get it wrong!  What is it going to take people to realize that he owns a ship?  I mean, haven't you ever seen the Black Pearl?  It's amazing!  His captainess means so much to Jack.  Can't people ever just abide to his wishes?  Even as he's waiting to be hung, he complains about how he wishes for people to call him by his true potential: Captain.  Will anyone agree to his final wishes? 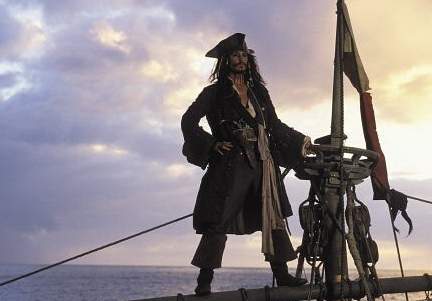 Email ThisBlogThis!Share to TwitterShare to FacebookShare to Pinterest
Labels: At Worlds End, Curse of The Black Pearl, Dead Mans Chest, On Stranger Tides