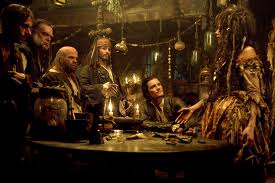 So what lead up to Davy Jones being a fish face you might ask. Well he fell in love; .Tia Dalma: You know of Davy Jones? A man of the sea, a great sailor. Until he run afoul of that which vexes all men. Will Turner: What vexes all men? Tia Dalma: What indeed. Gibbs: The sea? Pintel: Sums? Ragetti: The dichotomy of good and evil? Jack Sparrow: A woman. Tia Dalma: A woman. He fell in love. Gibbs: No, no, I heard it was the sea he fell in love with. Tia Dalma: [annoyed] Same story, different versions. And all are true. See, it was a woman as changing and harsh and untamable as the sea. Him never stopped loving her. But the pain it caused was to much to live with, but not enough to cause him to die. Will Turner: What exactly did he put into the chest? Tia Dalma: Him heart. Ragetti: Literally or figuratively? Pintel: He couldn't literally put his heart in a chest. Could he?
Tia Dalma: It was not worth feeling what small, fleeting joy life brings.

A women? But he is a pirate! How could he betray what should be his only love the sea?

Quite simply actually; His love is the goddess of he sea Calypso. Calypso was captured by the very first brethren court and trapped into the human form that became Tia Dalma. She has been helping pirates like Jack for years. She's even brought back pirates from the dead. But she has never stopped love Davy Jones.
"Ten years I devoted to the duty you charged me. Ten years I looked after those who died at sea. And finally, when we could be together again…you weren't there! Why weren't you there?" "It's my nature. Would you love me if I was anything but what I am?" "I do not love you." Unfortunately the feeling is no longer mutual.  However as Davy Jones is dying he utters one final word..."Calypso" This leads me to believe that his love for her never has and never will die.
Posted by Snippets Of Jack at 11:13 AM