"A Betrayer Among Them?"

With all great stories and tails there are little bits of sadness, happiness, love, and betrayal. Join me as I chart my favorite betrayals and betrayers from the Pirates of the Caribbean  series. 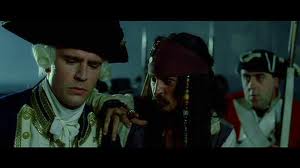 4. Jack Sparrow's betrayal of the Crew of the Black Pearl Captained by Hector Barbossa.  To save the life of his friend and conspirator Will Turner and his "Daisy-Belle" Elizabeth Swann; Jack had to go to his longtime enemy James Norrington. He told them of the pirates plan escape, and what the Royal Navy had to do to stop them. Of course Norrington ignored him and carried out his own plan unwittingly steering his crew into an unwinable battle against men who can't die. But this is a Betrayal none the less, even thought Jack failed to help the Navy defeat the pirates. 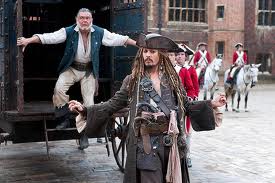 3. Jack Sparrow's betrayal of  Gibb's to the court. This betrayal was more for fun then anything else. While on trial for piracy etc. Gibbs is accused of being Jack Sparrow, and the Judge Smith(Jack Sparrow) finds him Guilty of: [Bangs his gavel] Joshamee Gibbs. The crime of which you have been found guilty of, is being innocent of being Jack Sparrow. I hereby commute your sentence and order that you be imprisoned for the remainder of your miserable, moribund, mutton-chopped life." Well that was quite creative! Of course Jack has a plan, he hopes on board the prisoner transport vehicle with Gibbs and tells him of his latest plan: Find the Fountain Of Youth.  But his plan is temporarily changed when the transport stops abruptly and Jack is captured by the British....again.

2. Elizabeth's betrayal of Jack, to the Kraken. This is pretty much the most heartless thin Elizabeth Swann has ever committed.  By committing this act of treachery she not only betrayed Jack, but she betrayed her beloved Will too. So lets all learn from this stupidity: Don't try to Kill Jack Sparrow, it will always come back to bite you in the butt. So Jack thought he was finally going to get his kiss from Lizzie, and he did but he also got eaten by the kraken. On the upside he found his hat!

1.  Jack's betrayal of Angelica and Blackbeard. This is possibly the grossest moment in all time, watching Blackbeard have his flesh ripped from his skin, and his bones dissolved. Fun, ehh?   Leading up to this moment Angelica had planned to give her own life to save the life of her "Father". But Jack couldn't let that happen! So he switched up the chalices and saved Angelica, who didn't appreciate being saved at all! Angelica: [to Jack]: "You bastard! How could you?!" Jack Sparrow: "Your father saved you. Perhaps his soul is now redeemed, hey!" Angelica: "I hate you!" Jack Sparrow: "The bloke who saved your life?" Angelica: "The years I posses, stolen from my own father!" Jack Sparrow: "I only helped Blackbeard do what any father should have done." Angelica: "You are cruel and ignorant. "      How ungrateful!

Well there you have it my top 4 betrayals and betrayers, seems like Jack has his hands in a bunch of these sticky situations, but we still love him right?