As you were, gents.

Jack and Will are on the hunt or a crew; But of course they need a first mate. Insert Mr. Gibbs, Jack's most faithful and closest friend. They find him drunk and sleeping in a pig-pen. But hey, thats the life of a pirate right? So after some thought they wake him up, with whatever is closest, and that happened to be two buckets of water." Mr. Gibbs: Curse you for breathin' ya slack-jawed idiot. Mother's love. Jack. You should know better than to wake a man when he's sleepin'. Its bad luck. Jack Sparrow: Fortunately, I know how to counter it; the man who did the waking buys the man who was sleeping a drink; the man who was sleeping drinks it while listening to a proposition from the man who did the waking. Mr. Gibbs: Aye, that'll about do it. [Will throws more water on Mr. Gibbs] Mr. Gibbs: Blast! I'm already awake! Will Turner: That was for the smell." This begins the search for the toughest and craziest crew to ever sail the seven seas.

Now where would a pirate like Jack go to look for a crew you might ask; well where else. a bar of course! The crew that they found consisted of some very interesting men, and to Gibbs chagrin women. This particular woman hated Jack. Big surprise there. However Jack quickly smoothed things with her by promising her a ship at the end of there journey. And so the journey begins 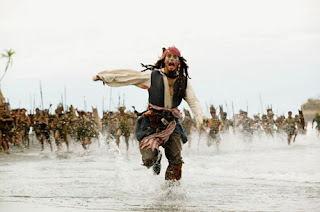 This crew stayed with him for the many journeys, but more then once left him to die all because of that dreaded pirate code. When on an Island with some crazy cannibals The crew  and Will escaped; unfortunately Jack fell behind and almost missed the boat. The second time wasn't entirely their fault. That blasted Elizabeth girl handcuffed him to the main mast of the boat and sealed his fate.

A fate that included being eaten by a monster with rather smelly breath. However Jack's crew came to his rescue and brought him back to life, however he didn't go willingly with them at first, but they convinced him and brought him back (using his ship) like any good crew would. 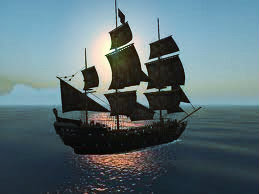 Posted by Snippets Of Jack at 2:07 PM