"The Dark Side Of Ambition"

In The Pirates of the Caribbean: Dead Man's Chest, After sailing for who knows how long, Elizabeth, Jack, and Norrington finally find the chest containing the heart of Davy Jones.  Once their on the island, they have trouble finding the exact location.  Elizabeth, who is using the compass to find it, becomes incredibly angered because the compass keeps pointing at Jack.  (Jack is pretty popular.  The compass seems to always be pointing at him).  She sits down in frustration.  Jack comes over to see what the problem is.  When he looks at the compass, it is pointing to Elizabeth's butt.  That's when he finally realizes that Elizabeth is sitting on the spot that the chest is buried.  Once they have that cleared away, Elizabeth and Jack sit on the sand and make Norrington dig it up.  Yay!  They've found the chest, and they can even hear the heart beating in side of it.  Which is exciting but also pretty creepy.

The problem is, although they have the chest at last, they don't have the key to open it.  Lucky for them, Will turns up with the key.  Will, of course, doesn't want to just hand the key over to Jack after Jack tricked him into being held captive on the Flying Dutchman.  Instead, Will want's to stab the heart himself so that he can fulfill his promise to his father of freeing him from the cruel work on the Dutchman.  Jack has a different plan: "Can't let you do that, William. 'Cause if Jones is dead, who's to call his terrible beastie off the hunt, eh? Now, if you please. The key."  Will: "I keep the promises I make, Jack. I intend to free my father. I hope you're here to see it."  Norrington: "I can't let you do that, either. So sorry."  Jack to Norrington: "I knew you'd warm up to me eventually."  Norrington: "Lord Beckett desires the contents of that chest. I deliver it, I get my life back."  Jack: "Ah. The dark side of ambition."  Norrington: "Oh, I prefer to see it as the promise of redemption."  And they all have their swords pointed at each other.

Once they break out into a sword fight, Elizabeth gets incredibly angry with all of them.  "Oh fine! Let's just haul out our swords and start banging away at each other! That will solve everything!"  She's so incredibly desperate for them to stop, she starts screaming and throwing rocks at them.  She even pretend to faint because of the heat.  No one stops.  No one even notices that she "passed out".  Sorry Elizabeth, but that trick isn't going to work this time.  Ouch. 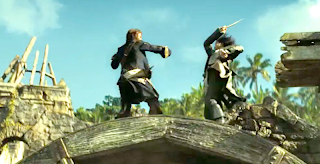 The boys (yes boys because none of them are really acting mature like men) chase each other around the whole island, all of them attacking the others.  Norrington to Will about Jack: "Do excuse me while I kill the man who ruined my life."  Will: "Be my guest."  Jack: "Let us examine that claim for a moment, former commodore shall we?  Who was it that at the very moment you had a notorious pirate safely behind bars, saw fit to free that pirate and take your dearly beloved all to his self, aye?  So whose fault is it really that you've ended up a rum pot deck hand who takes orders from pirates."  Um, ouch.  Norrington: "ENOUGH!  Unfortunately, Mr. Turner, He's right!" A lot of angry emotions are coming out of dear James in the scene, so they are again thrown into another intense  and totally epic battle in which they role around the island in a wheel.
Posted by Snippets Of Jack at 11:55 AM