"This Ship Is Haunted"

After escaping from jail and stealing the letters of marque from Lord Beckett, Elizabeth commits another act of piracy as she becomes a stowaway on a ship leaving the port.  Lucky for her, this unusual crew isn't really the smartest gang.  She finds some of the workers clothes and disguises herself as part of the crew.  But the other men on the ship become very confused when they find her dress just laying around.  A great panic breaks out on the boat as no one can figure out what to do with this myserious dress.  The captain hears the arguing and comes to break it up.  Captain: "What's all this?  If you both fancy the dress, you'll just have to share and wear it one after the other."

This lightens the mood of the crew a bit.  Crew member: "It's not like that, sir. (Really?)  This ship is haunted."  Captain: "Is it now?  And you?" Other crew mate: "There's a female presence amoungst us here, sir.  All the men, they can feel it."  Yes, I'm so sorry Elizabeth had to climb on board your ship.  This is rather unfortunate.  A different member: "It's the ghost of a lady widowed before her marriage.  I figure it, searching for her husband, lost at sea."  You can tell all this from a dress?  Really, you're not that far off.  She is trying to find her fiance, Will, somewhere at sea.  Other member: "A virgin too, likely as not.  And that bodes ill by all accounts."  Elizabeth usually does.

Other member: "I say that we throw the dress overboard and we hope the spirit follows it."  Other member: "No!  That will just anger the spirit sir.  What we need to do is find out what the spirit needs, and then give it back to her."  Elizabeth, who is hiding in the crowd listening to their gambling, just laughs at their stupidity.  The captain however, knows better.  Captain: "Enough! Enough!  You're a pair of superstitious goats, and it's got the best of you.  Now, this appears to be no more as we have a stowaway on baord.  A young woman by the look of it.  I want you to search the ship and find her.  Oh, and uh, She's probably naked."  A dress or nothing, ya know what I mean?  Well this idea excites the whole crew and they all start rushing around the deck to find her. 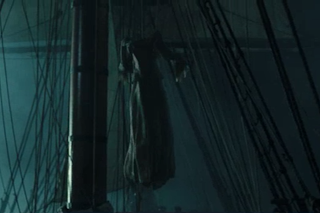 However, they never end up sailing with Elizabeth but continue to run into problems.  The don't know where to make port and the only free port they can think of is the infamous Tortuga.  But the captain believes that Tortuga is nothing but a pirate port and refuses to go anywhere near it.   Elizabeth has different plans though, and of course she always has to get her way.  She creates a puppet with her dress and stands on the mast to manuver her trick around.  The crew, seeing the floating dress, act quickly to find the spirit.  Crew member: "She wants you to do something."  Captain: "She's trying to give a sign."  I thought you don't believe in ghosts.  Elizabeth makes the dress move around the ship more, knocking over a lamp which begins to burn oil on the wood.  The crew pays no attention to it.  Instead, they look out into the ocean.  Crew member: "Over there!  Look for a sign!"

Elizabeth is exasperated that these idiots can't figure out her trick.  Member: "Look there!  There it is! There's the sign!"  Other member: "That's seaweed."  First member: "Seaweed can be a sign." Other member: "It looks like entrails."  Different member: "That would be a bad sign."  ELizabeth gets impatient and comes down onto the deck.  Elizabeth: "Whats that over there?"  She points to where the fire is lit.  The crew anxiously runs over to the fire, where a great suprise awaits them. Nice work Elizabeth. 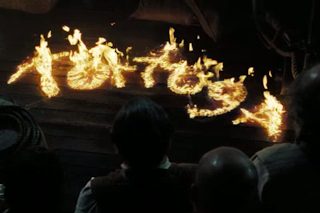 Posted by Snippets Of Jack at 8:00 AM