"First To The Finish Then?"

In Shipwreck Cove, Elizabeth, the newly elected king of the Brethren Court, and Jack talk the nine pirate lords into declaring war against the East India Trading Company and the Flying Dutchman.  All the pirates take their places on the ship and prepare for battle.  However, things don't really go as planned when the Royal Navy ships begin to appear in the horizon.  At first it seems as though there is only one ship and the Brethren Court is sure to win, however, the ships keep multiplying until they fill the horizon, clearly out numbering the Brethren's forces.  And it being his idea to fight, every member of every crew angrily looks at Captain Jack.

Jack: "Parley?"  Desperately, King Elizabeth takes Barbossa and Jack to a little meeting on shore to discuss their plans.  They also meet Davy Jones, Lord Beckett, and Will Turner, who lead the Navy to the Cove.  You can tell by the intense rock music playing as the two parties meet that this is not just any parley.  Barbossa, upon seeing Will with Beckett quickly blames him: "You be the cur that led these wolves to our door."

Beckett: "Don't blame Turner.  He was merely the tool of your betrayal.  If you wish to see its grand architect, look to your left."  Barbossa looks to Elizabeth; Elizabeth looks to Jack; Jack looks to the sand.  I wonder who it could be.  Jack: "My hands are clean in this. Figuratively."  Will: "My actions were my own and to my own purpose.  Jack had nothing to do with it."  Jack likes this idea: "Well spoke.  Listen to the tool."  Then of course, Elizabeth being king now thinks what she says matters.  Elizabeth: "Will, I've been aboard the Dutchman.  I understand the burden you bear, but I fear that cause is lost."  She wants him to give up trying to save his father so he can go live happily ever after with her.  WELL TOO BAD!  Will: "No cause is lost if there is but one fool left to fight for it."  Jack finds this amusing.  Beckett: "If Turner wasn't acting on your behalf, then how did he come to give me this?"  That awkward moment when Beckett pulls out Jack's compass.

Technically, that's all Becket and Will agreed on back in The Pirates of the Caribbean: Dead Man's Chest but I don't think Beckett's going to be letting anyone go any time soon.  Barbossa gives Jack a pretty hurtful look.  Beckett: "You made a deal with me, Jack, to deliver the pirates.  And here they are.  Don't be bashful.  Step up.  Claim your reward."  And all the secrets are revealed.  Jones: "Your debt to me is still to be satifisfied.  One hundred years in servitude aboard the Dutchman.  As a start."  As fun as the sounds, Jack isn't all that thrilled about this idea.  Jack: "That debt was paid, mate.  With some help [motions to Elizabeth]."  Everyone is a betrayer.  Jones doesn't buy this: "You escaped."  Jack: "Technically. . ." 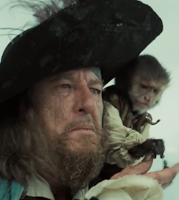 Elizabeth: "I propose an exchange."  Jack seems relieved, thinking Elizabeth is about to save his butt.  Elizabeth: "Will leaves with us . . . and you can take Jack."  Everyone on Beckett's side is satisfied with this idea, but Jack and Barbossa on the other hand aren't as excited.  Barbossa wants too keep Jack to release Calypso and Jack is just scared of Davy Jones.  Will: "Done."  It's not really you're place to make the agreement, but good to know we have your support, Will.  Jack: "Undone!"  Beckett: "Done."  Barbossa: "Jack's one of the nine pirate lords.  You have no right."   Elizabeth: "King."  Well that plan backfired.  Elizabeth likes power.  Jack bows mockingly to her: "As you command, your nibs."    Barbossa takes out his sword and cuts off Jack's piece of eight to free Calypso.  "Blackguard!" We have no idea why Barbossa screams this.  What does it mean?  Barbossa: "If ye have something to say, I might be saying something as well."  Barbossa reveals that he still plans on releasing the sea goddess from her human bonds.  Jack: "First to the finish, then?" 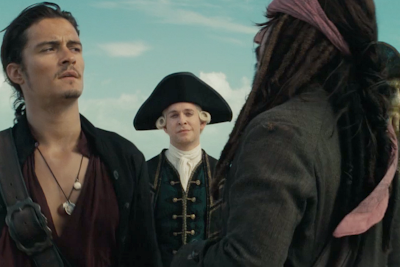 Jack and Will trade places.  Let the games begin.  Davy Jones still looks at Jack like he's a meal.  Jones: "Do you fear death?"  Jack: "You've no idea."  Beckett realizes that the Brethren still plan to fight.  Beckett: "Advise your Brethren, you can fight, and all of you will die.  Of you can not fight, in which case only most of you will die."  That sounds really tempting.  Elizabeth: "You murdered my father."  Thank you for sharing that random fact with us.  Beckett: "He chose his own fate."  Elizabeth: "And you have chosen yours.  We will fight. And you will die."  Lovely. Beckett: "So be it."  Elizabeth, Barbossa, and Will slowly start to walk away back to the Brethren.  Will: "King?"  Elizabeth: "Of the Brethren Court.  Courtesy of Jack."  The irony of piracy.  Will: "Maybe he really does know what he's doing."  It's taken you this long to figure it out?
Posted by Snippets Of Jack at 8:00 AM