"I saved your life, you saved mine."

James Norrington thinks he has it all together.  He's about to receive a promotion to Commodore of the Royal Navy and propose to the daughter of the governor of Port Royal, who he is deeply fond of: Elizabeth Swann.  So after his promotion ceremony, he takes her aside and they go together to the top of Fort Charles, overlooking the Caribbean Sea.  Norrington: "You look lovely, Elizabeth."  Indeed she does, but her dress is so tight on her she can barely breathe.  She's panting and fanning herself desperately.  James doesn't seem to notice: "I apologize if I seem forward, but I must speak my mind.  This promotion throws into sharp relief that which I have not yet achieved.  A marriage to a fine woman.  You have become a fine woman, Elizabeth."  She seems to be actually listening now, but she still is gasping.  Elizabeth: "I can't breathe!"

The sun and the dress must be getting to her.  Norrington: "Yes, I'm a bit nervous myself."  In slight embarrassment, he turns away.  But right at the wrong moment.  She faints and starts falling down into the sea.  Norrington turns back to where she was standing, puzzled by the silence.  But things only get even more puzzling when she's no longer there.  Norrington: "Elizabeth?"  Then he sees the splash in the water so very far below and starts to panic: "Elizabeth!"  He's about to jump down after her, but some of the other soldiers hear him and come to see whats going on.  Soldier: "The rocks!  Sir, it's a miracle she missed them!"  So he runs down to get help.  Mean while, Jack is hanging out on the interceptor telling Murtog and Mullroy all about his many adventures and fooling them quite a bit.

This is Elizabeth's lucky day because she randomly decided to out on the pirate medallion.  Well this little piece of gold makes a huge scene when it hits the water dramatically.  The wind changes and things get a little creepy.  Jack saves the day by jumping into the water and saving her from the bottom of the sea.  They reach the surface, Elizabeth still unconscious. Jack can't keep both of them afloat so he rips off her new fancy dress and lets it sink to the bottom.  He finally brings her back onto the Interceptor, cuts off her corset, and she begins to breathe.  The only problem is that the Royal Navy has arrived by this time lead by the new Commodore James Norrington.  But once they find out Jack is a pirate, they arrest him at once.  Elizabeth: "Commodore, I really must protest!"(  She seems quite used to calling him Commodore even though it's only his first day on the job. ) Norrington pretty much ignores her.

Elizabeth: "Pirate or not, this man saved my life."  Norrington: "One good deed does not redeem a man of a life time of wickedness."  Norrington, like Will, like Beckett, seems to loathe pirates.  Jack, of course, comes up with something witty: "It's enough to condemn him."  Norrington: "Indeed."  When they finish putting the handcuffs on him, Jack acts quickly: "Finally."  He flings his handcuffs around Elizabeth's neck and hold her tightly so she can't get away.  Governor Swann has his usually petty fit about his poor little girl.  Governor: "No!  No!  Don't shoot!"  Jack: "I knew you'd warm up to me.  Commodore Norrington, my effects, please.  And my hat."  You really can't forget his hat.  All the soldiers look very nervous and aren't sure what to do, even Norrington.  Jack becomes impatient.  Jack: "Commodore!"  Grudgingly, Norrington gives Jack back all his supplies (even though he talked about how crappy they were). 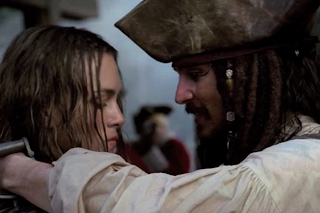 Jack creepily tries to start a conversation with his captive.  Jack: "Elizabeth . . . It is Elizabeth?"  Elizabeth: "It's Miss Swann."  Jack: "Miss Swann, if you'd be so kind.  Come, come, dear.  We don't have all day."  Since Jack's hands are cupped, she has to take his stuff and put them away for him.  He keeps his gun out, pointed at her head to make sure she cooperates (which she hardly ever does).  Jack: "If you'll be very kind."  So she angrily puts his hat on his head and slips his back around his back, causing her to reach her arm around him.  This of course makes Jack very happy and he gives a little "haha" look to Norrington who is jealously watching.  He just rolls his eyes.  Jack: "Easy on the goods, darling."  Elizabeth: "You're despicable."  It's so funny to see her hate Jack so much when you know how she feels about him later.  Jack: "Sticks and stones, love.  I saved your life, you saved mine.  We're square."  He has a point.  She was trying to save his life before.  He shoves her back around and does his usually announcement: "Gentlemen, my lady, you will always remember this as the day you almost caught Captain Jack Sparrow."  With that she shoves Elizabeth free and blasts himself into the air.

The governor doesn't exactly approve of this behavior and they all start to shoot at him missing of course.  And this is the first of many of Jack Sparrow's brilliantly improvised escapes.  Probably not the best day for Norrington though, since Elizabeth never gets back to him about the proposal until much later.  His very first day on the job he has to deal with the best pirate ever not to mention deffend the love of his life!  If only he wasn't turning his back on her when she fell.  Poor guy, you'd think some young man as good looking as he is would get a little luck.  But then again, he's up against Captain Jack Sparrow.  Does anyone really stand a chance?
Posted by Snippets Of Jack at 10:09 PM